Judging a book by its cover

If a picture tells a thousand words, then a book cover must tell even more. One of the great benefits of self-publishing is the complete control it affords over covers, which are one thing that commercial publishers often get wrong – especially when it comes to horse books.

As part of Horseback Reads, a group of self-published equine fiction writers from around the world, I have been intrigued to discover that it’s not just me who obsesses over the covers of my books. In fact, I’m even less picky than some of the other authors in that group, all of whom are very dedicated to producing the best covers possible. Here are some of their efforts…impressive, no?).

I was recently looking through online stock photos on Pixabay (a website where you can download FREE! stock images for commercial use) and found one that seemed ideal for book 9 in my Pony Jumpers series. Trouble is, the horse is completely the wrong colour to be the protagonist’s pony. No bother, I thought, I can pretend that it’s her best friend’s horse, who will feature in the book. Except that her friend’s horse is black, and while the horse in the photo appears, at first glance, to be black with a blaze, on closer inspection it’s revealed to quite clearly be a very dark grey.

After all, I’ve already used an image on the cover of book 5 of this series that has a horse of the ‘wrong’ colour. The heroine’s pony is a steel grey, but the horse on the cover is a light grey with a dark mane. And yet I liked the image so much that I decided it didn’t matter. It looks good, and that’s a bigger priority for me than whether or not the image matches the story perfectly.

I designed and set up the covers for the PONY JUMPERS books myself in Adobe InDesign after finding the images and fonts online. I liked the idea of using the sketch version of the font for the numerical part of the title, and the block text for the rest.

I do believe though that covers are massively important, and that things like font choice, layout, resolution (!), framing and more are absolutely crucial. You want covers to look smart, eye-catching and (above all) professional. Covers that are clearly home-made and just scream I did this myself in MS Publisher are a huge turn-off for me. If you can’t do it yourself, find someone else to do it for you. You might have to pay that someone, but it will be worth it. Trust me.

The amount you can spend on a cover ranges from $0 (if you do it yourself and use images you don’t have to pay for) to $100+ (if you hire someone to do it/commission a photo/both), with the in-between cost of between $10-$30 of doing it yourself after purchasing a stock photo. And first you’ve got to find the right photo…

Sometimes finding a cover image can be easy – an image might jump out at you and it just fits perfectly, like the cover shown below for my most recent release, SIX TO RIDE. Six bridles and a yellow background that would match the yellow strip at the top (even if one of the bridles is hung up by the browband instead of the headstall, I’ve done my best not to let that bother me too much! Like I said before, if everything else is perfect…). And the missing bridle is a little nod to the fact that one pony is sold during the course of the book, which technically brings the tally down to five to ride, but who’s counting?

When selecting images for the PONY JUMPERS books, I take three key things into account:

Is it the right size/shape? Because the covers are set up to incorporate a landscape image, it has to be one that will fit neatly into that space. As much as I may love a portrait shot, if I can’t get it to work in the space provided, it’s a no go.

Is it the right colour? I’ve got a printout on my office wall of the covers I’ve mocked up so far, and there’s a theme running through each one. All of the covers for AJ’s books, which have the purple banner at the top, either have something purple in the image (like the saddle blanket in FIRST FENCE) or a blue/purple background, which ties it into the colour scheme. Likewise for Katy’s books, which have the yellow strip, and so on. It’s not an absolute pre-requisite – the placeholder image for book 16 has no green in it, but it works and so it’s staying for now – but it certainly helps.

If there is a horse/pony shown in the photo, does it match the story? Here’s where I am a bit more casual about things, as mentioned earlier. And I recently found two different images that I really like for book 11 – one has a grey horse, the other a bay. But the horse in the story is, in my head, chestnut. That’s okay though – she has time to change colour. Once I settle on a cover, I’ll write the horse into that book to match.

The cover photo I used for DARE TO DREAM was one I commissioned from a friend, and she also took the photos for my CLEARWATER BAY series. In both cases, the pony that ended up being on the cover was a bit different from the one that I’d had in my head while writing – DARE TO DREAM’s Cruise originally had a blaze, and FLYING CHANGES’ Finn had a tiny white star – but I simply touched up the stories to match the covers.

“Between his eyes was a star shaped like a lightning bolt, and between his nostrils was a big splash of white, as though he’d dipped his nose into a bucket of white paint.” – Dare to Dream

My theme with the Pony Jumpers covers is to use little details or snapshots on the covers – a saddle on a fence, a pony’s eye, a bundle of rosettes, a pile of jumping rails.

When it came to finding a cover for book seven, SEVENTH PLACE, I was on the fence between two of them, so I put them on my Facebook page and asked readers to vote. The overwhelming winner was this one, which is a dynamic shot that has just enough red in the background and on the girth to tie into the pink at the top. It’s also  helpful that Susannah, the protagonist, has not one but two dark bay ponies, and the pony in the shot could be either of them. (Given the height of the jump behind her, in my head it’s her younger pony Forbes, but it could be Buck if you wanted it to.) And I can’t wait to reveal the cover for book 8 – it’s an image I’m particularly fond of.

Do you have a book cover that you particularly love, or loathe? Comment below!
Posted by Kate at 9:05 PM 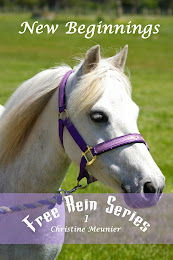 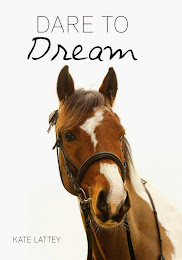 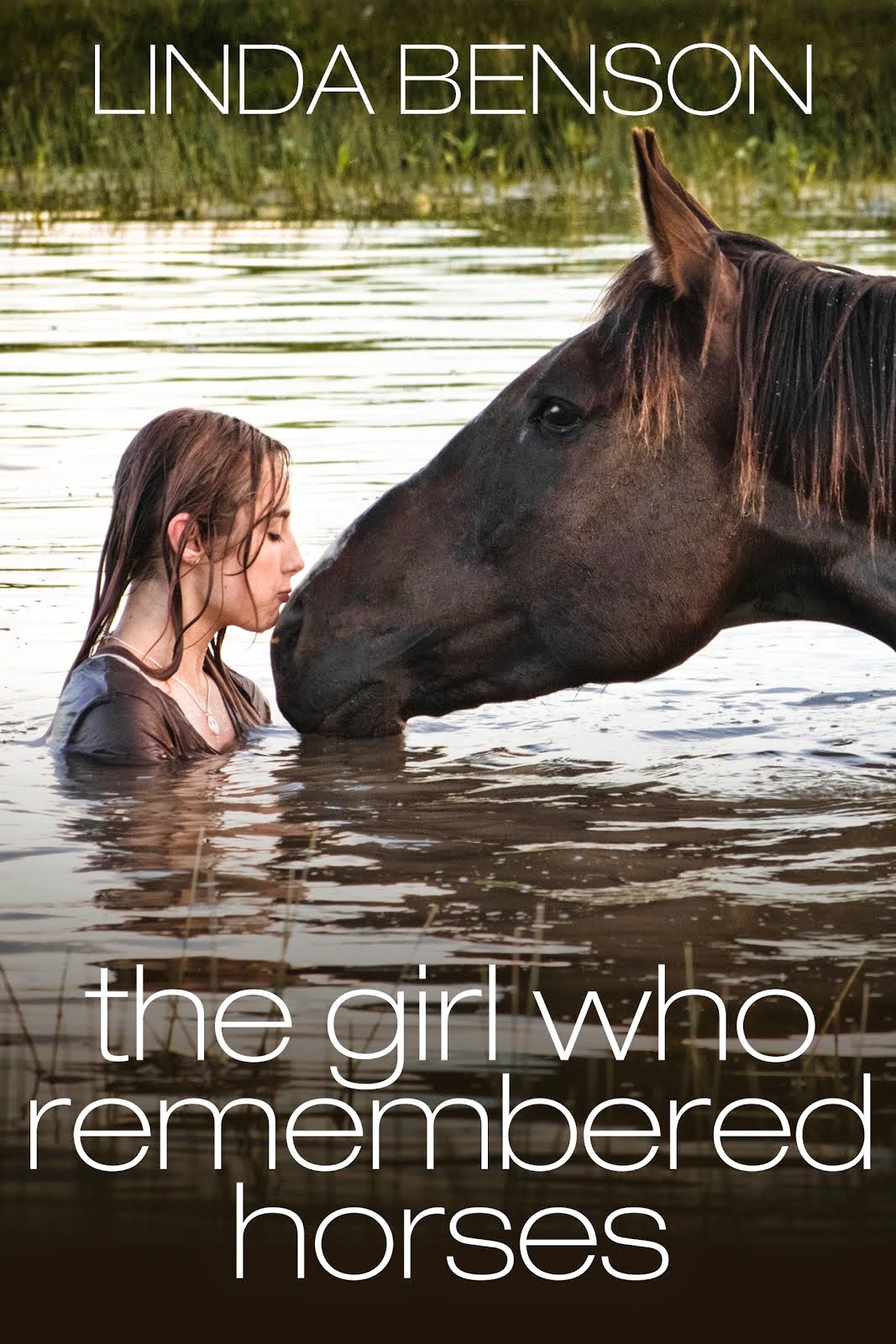 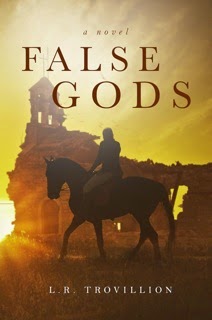 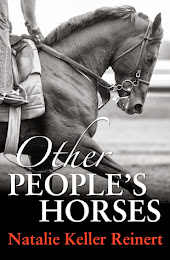 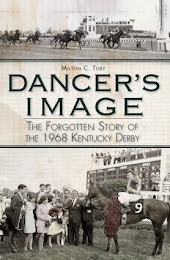 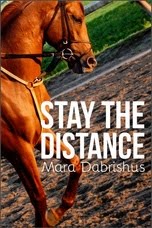 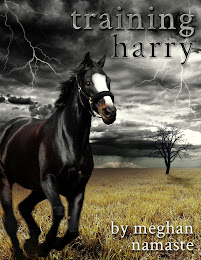 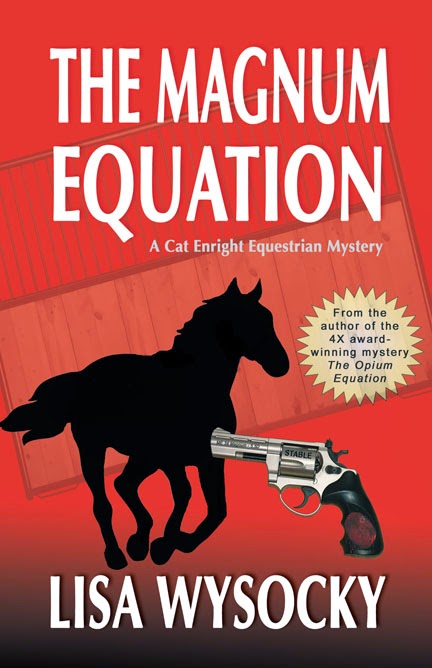